St. Michael the Archangel, defend us in battle.  Be our protection against the wickedness and snares of the Devil.

May God rebuke him, we humbly pray, and do thou, O Prince of the heavenly hosts, by the power of God, cast into hell Satan, and all the evil spirits, who prowl about the world seeking the ruin of souls. Amen.

There has been a little problem this week at Jorgito’s house. It all began last Monday when the teacher sent a note asking parents to bring their children to school dressed for Halloween. Mamá was bothered just by reading it but, as the mother of five that she is, far from showing her irritation, she rose in the face of adversity and found the solution to the problem.

“Mamá, I want to go as a warlock!” suggested the excited Jorgito, without knowing very well what he was saying. “Javi will be a devil, Maria will be a witch, and Antonio will be a skeleton…”

“No, Jorgito,” Mamá interrupted decisively. “You will go as St. Michael.”

Our Jorgito knew very well who St. Michael the Archangel was. In fact, he asked for his intercession every night. His question was not meant as an inquiry about the identity of the Archangel, but about the reason for including him at the school’s Halloween party. To Jorgito, that response seemed to lack all logic.

“Of course, honey” responded Mamá skillfully. “Someone has to bring order to the devils. And what did St. Michael do?” Mamá knew very well the response that her son would give, for she had told him thousands of times. In fact, it was one of her son’s favorite stories:

“He expelled the devil from heaven! Well, of course, Mamá! I’ll be the envy of the party! I can already picture my friends’ faces while I chase them through the playground…”

Mamá knew that her decision would bring problems at school, one more to add to the list. But Mamá is stubborn (as are all mothers of large families) and once she makes a decision, she rarely changes her mind. She searched on Amazon.com (the most convenient store for families that don’t have time) for two costumes that could work, a Roman centurion and a Christmas angel, and she combined them wonderfully to create a more than acceptable St. Michael, the Archangel.

Jorgito’s eyes lit up when he saw himself in the mirror. The centurion’s uniform looked marvelous on him and the angel’s wings were nicely made. He was only missing a sword to complete his outfit, and there Papá intervened to provide the finishing touch of grace. He took a beautiful (plastic) sword from his coat, giving it only after obtaining Jorgito’s firm promise not to hit any demons with it.

“All right, at least as long as they pay attention to me, Papá” he responded with an angelical air.

This affirmation was enough for Papá and he entrusted it to him gallantly.

Jorgito marched happily to school, loving the feeling of being the boss. Everything was going well until the teacher asked Jorgito about the reason for his strange attire. And our Jorgito, who knew a lot about this, did not hesitate to give the play-by-play of the expulsion of the devil from the celestial court. This mustn’t have humored the teacher much, who became more and more uncomfortable as the story went on. But much worse was the reaction of the rest of the kids in class, when they quickly realized that they represented the band of evil. And, of course, no one likes to feel like a loser… The result was a room full of students crying about the injustice of the whole thing and asking the teacher to remove the abominable makeup from their faces. Jorgito, who found himself on cloud nine, made things even worse by running from side to side, shaking his sentencing sword.

When Mamá returned to pick up our protagonist from school, she was met by a very upset teacher who, nonetheless, was kind enough to call her aside. Once alone, the teacher demanded that next year, she kindly stick to what was asked and find a scary costume for her son. “Like the rest of the world,” remarked the teacher.

It was an uncomfortable moment, but the Christian stands up to the world or dies. Mamá opted for the former. Without thinking twice, she responded that if the teacher wanted a costume that evoked fear, she shouldn’t worry, because Mamá would dress her son up like one of the four horsemen of the Apocalypse.

Another one of Jorgito’s virtues is his intelligence. Therefore, he did not fail to notice the livid face made by his teacher while listening to his mother. Since then, he could not sleep a wink thinking about the fun that next year’s Halloween party would bring.  If the very mention of this mysterious horseman would make his teacher nearly faint … what would happen with his friends!

At night, once home, after preparing homemade treats to celebrate the feast of All Saints, he climbed into bed to tell Jesus about his day. It was a wonderful surprise when he found the great St. Michael himself in prayer.

“Hello, Jorgito! I was very proud of you today. You represented me very well.”

Jorgito smiled excitedly and thanked him. It was the best end to the day that he could have dreamed of.

“Just one thing, Jorgito. Next time, when you chase after demons, remember to target your teacher too…”

And with a mischievous wink, St. Michael said goodbye in order to make way for his great Friend, who was anxiously waiting to hear about Jorgito’s day. 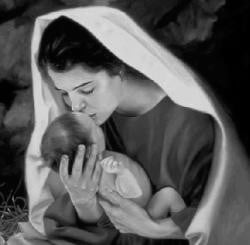