I am afraid of the times of recreation that we, the friars, have on Wednesday evenings. Although –and to be honest- I love them. It is true that I get tired of explaining things to my novices (who are of all trends), but I also recognize that I do enjoy pointing out to the more modernist of them their own contradictions and ravings. Poor souls, so used to swallowing the old wives’ fables (those that St, Paul was referring to when he wrote his first letter to Timothy in 4.7: But avoid foolish and old wives’ fables: and exercise thyself unto godliness). Paul knew what he was saying, even though he had not yet heard the homilies of Santa Marta. But he was very clever and knew what was going to happen.

The star question of this week came addressed to me as some kind of modernist torpedo or missile. Francis has spoken of the obstinacy of those who cling to tradition and refuse to open themselves to the novelties of the Spirit and the surprises of God:

“Christians who obstinately maintain ‘it’s always been done this way,’ this is the path, this is the street—they sin: the sin of divination. It’s as if they went about by guessing: ‘What has been said and what doesn’t change is what’s important; what I hear—from myself and my closed heart—more than the Word of the Lord.’ Obstinacy is also the sin of idolatry: the Christian who is obstinate sins! The sin of idolatry. ‘And what is the way, Father?’ Open the heart to the Holy Spirit, discern what is the will of God.”

– What do you think of all this, Fray Gerundio? Does your reverence think that he has any reasons for these words? (Giggles in the background…)

-Of course he has his reasons. His analysis is very accurate and reasonable. And it seems to me very appropriate to use the adjective obstinate. Precisely, a few months ago I used this same word in one of our Wednesday talks.

And then I started to explain to them with all the patience I was capable of the meaning of obstinacy and how that certainly leads into idolatry. My rant, which was given next to the south facing cloister, was precisely about the obstinate and idolatrous Vatican II and the post-conciliar Church.

We are in an era in which the doctrine, the texts and the infinitely vaunted spirit of the second Vatican Council have been completely idolized. All kind of mischief and misdeeds have been built upon this.

We have faced the last fifty years of the Church without thinking of anything else. Or even better: only thinking about destroying everything that was previous to 1963. The deterioration has been huge. You can easily see the disaster and cataclysm produced by the secularizations and the subsequent marriages of priests; an aggressive and exponential decrease in in the number of members of Religious Orders (men and women); the attendance decline at Sunday Mass; a catechetical earthquake which meant that no one knows the catechism now (despite the publications of Catechisms and Compendiums) or that no one cares about with it anymore; the debacle of Theology, with a legion of official theologians questioning and/or denying the fundamental dogmas of the Church; the elimination of faith in Sacred Scripture; the systematic emptying of Seminaries… and so on. No one can deny these purely statistical facts. Hence the usual post hoc, sed non propter hoc that the John Does have used for 50 years to assault the minds of the naïve Catholics.

It seems that the logical thing to do would be for at least one of the bigwigs to recognize the disaster, even if it were only to make an analysis, and in view of this, start over, change course to restore what is lost, to delete what is wrong, to acknowledge the errors, to recover the Catholicism that always was and to send those responsible into theological exile.

Yet, in spite of this, these idolaters continue to claim the successes of the conciliar and the post-conciliar doctrines over and over again. Francis is right. I believe that he refers to them. They are the idolaters of Vatican II and they are not open to the surprises of God. They insisted: since the Council, that is the way and we do not accept any change.

If the Spirit allows you to recover the Holy Mass of the Church of all times and it looks like there are quite a lot of faithful who value it and adhere to it… in that case the Bishops are closed to such a possibility of change. They prohibit the Mass and persecute the secular and recalcitrant traditionalists. Because since the Council, that is the way and we do not accept any change.

If the Spirit makes one see the failure of Ecumenism and of fifty years of ecumenical conversations, as well as of those meetings of Assisi… well, in that case the idolaters are locked up in their customs because they are still conversing with the other religions -more than conversing, they got into bed with then- while the catholic religion was emptied of faithful. Because since the Council, that is the way and we do not accept any change.

If there is the possibility of having Seminaries with many young vocations and of experiencing a pious priesthood, less mundane and more supernatural… in that case let’s dismiss the Bishop, let’s close its gates and send the seminarians back home. Because these seminarians do not live by the spirit of the Council, do not go to gay bars, do not go out with girls and do not go to the Taizé community. Because since the Council, that is the way and we do not accept any change.

If it can be perceived that there are many faithful Catholics who consider the Holy Mass as a true Sacrifice…  in that case let’s point the finger at them for being over the top and reactionary, because the Mass is a Banquet. It is forbidden to speak of a Sacrifice. Because since the Council, that is the way and we do not accept any change.

If there is someone who wants to change this drift of the Church and of her Pastors, and be open to what the Spirit wants to tell us, that this is a real disaster, that God has disappeared from the preaching, … that the Church has become nothing more than a mere NGO, a collaborator with the pagan UN, a collaborator with all religions (even those that are killing thousands of Christians)… in that case we must prevent ourselves from proselytizing by visiting a synagogue one Sunday and a mosque on the following Sunday. Because since the Council, that is the way and we do not accept any change.

That there are instructions from the previous Pope to change the words of consecration, and to say Pro Multis, instead of that which was rudely established by the spirit of the Council… in that case it is a sign of pig-headedness and they will not carry out the change. I already have spoken about the Spanish Episcopal Conference here. It´s the same with Francis, who refuses to change the words when he says mass in Italian (or ever). Because since the Council, that is the way and we do not accept any change.

The eyes of the most perceptive novices were on fire while thick drops of sweat fell down their cheeks. But I was firm in what I had said. We thank you, Holy Father, for opening our eyes and minds. I reject the post-conciliar stagnation and I earnestly unite myself to the change towards the doctrines of all time. That would be a real change. I am open to such an insinuation of the Spirit.

By the way, here I came across one of those insinuations of the Spirit, which are now favoured in the Vatican, episcopal, congregational and parish environments: a reality show for novices who have to live the virtue of chastity for a few days in front of the cameras. It is a very unusual surprise. They just love to desecrate like this (…). The real surprise would be if the Bishop or Bishops and their pertinent Superiors said NO to this openness to the Holy Spirit. 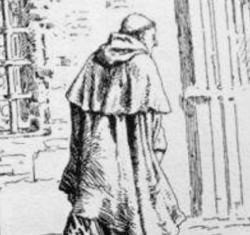