I Want to Trust Again

I
n the past, we were all raised with the moral values necessary to form a person.  Parents, teachers, and grandparents were all worthy of respect and esteem.  It was unthinkable not to respect our elders, our teachers, or other authorities.  We believed in adults because they always showed us the right path.  We were only afraid of the dark, of frogs, mice, and scary movies.

Today I feel a deep sadness for all that we have lost, for the fear that I perceive in the look of many people because the world has turned upside down.

Today, to pay one’s debts is to be foolish; forgiveness is given to con artists; the honest are ridiculed.  For many people, not taking advantage of the situation is to be a fool.

What has happened to us?

Teachers are treated poorly in their classrooms; shopkeepers are threatened by thugs; the corrupt publicly boast about their vices; we have to put bars on all of our windows because of the danger of being robbed.  Everyone lives in his own little world.  Kids demand gifts or money from their parents when they pass a class.

Where are the values?  What do we have to do to get a hug?  Since when is what’s right considered laughable?

For many people, an expensive car is more valuable than true friendship; a big screen TV more important than a conversation between friends; an Armani suit more valuable than a diploma.  Ultimately, we are more concerned with “what seems to be” rather than “what is.”

I am already tired of being scared and living in fear!  I want to remove the bars from my window so that my house doesn’t seem like a prison!  I want honesty to be a source of pride again!  I want uprightness of character, a pure face and look in the eyes to be in vogue again!  I want hope, joy, trust, and faith!

I want us to be ashamed of what is evil and to feel proud of proclaiming truth and virtue!  I want to take pride in our political and religious leaders again!  I want a man’s word of honor to be his oath!  I want to be and not simply to have and to do!  I want to get back to the true life, simple like the rain, clear as the April sky, crisp like the gentle morning breeze!

I dream of a simple world for all.  A world that has love, charity, respect, and forgiveness as its unquestionable values.

Let’s go back to being the protagonists in our own lives and rediscovering the treasure that we have hastily lost over these past few years.  A world where individuals are respected; in which we stop being tense, and where we can have true peace in our hearts.  In short, a world in which God is not embarrassed to live and could remain with us.

Utopia?  It’s possible, and we have to try.  Our children deserve it and our grandchildren will thank us. 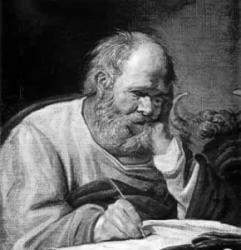